A while ago I posted this picture from my campaign notebook: 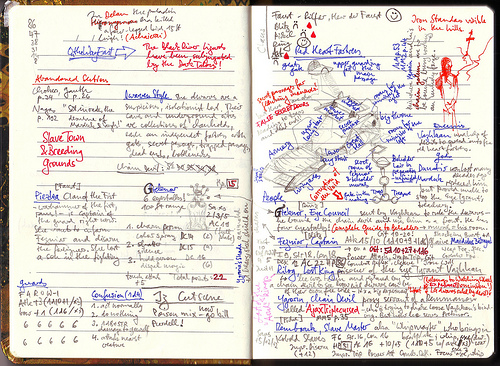 The Fight On! guys liked it but asked me to rewrite it and make it more readable. The result will be in Fight On! #8. I also wrote a little essay to go along with it. The essay won’t be in the magazine, so here it is for all those interested.

Here’s how I prepared a session, recently. One in two or three sessions will have this kind of preparation; the rest of the time players will return to locations they know from previous sessions and talk to old acquaintances. The notes you see grew over a period of two or three weeks. Every now and then I’d think of something and add it. The notes had color highlighting in blue, orange, red, and pink in addition to the ordinary pencil I usually use. It makes my notes easier to skim.

At the beginning I had decided that all dwarves in the region are evil because their god had disappeared. If my players were interested in that, it could lead to an epic planar campaign. And I knew the name of the dwarven settlement: Red Heart Fortress.

When my players move through a hex, there is a 1 in 6 chance for a random encounter. The creatures encountered are drawn from the current hex, the six neighboring hexes, and some NPCs I feel like introducing. When the party came close to the Red Heart Fortress, I needed an encounter involving dwarves for my table. Evil dwarves… The party had just made friends with the Golden Eye kobolds. The evil dwarves should be slavers, I decided. There would be a strong dwarf called Remboruk leading a chain gang of kobolds. The dwarf would be fighting with a whip, or a spiked chain, or both. And suddenly I realized that I had a good reason for the dwarven corruption. A chain devil had taken over the dwarven fortress. Like any dictator, the devil just made sure that the lawful dwarves kept each other in check. There would be a secret police. The slaver dwarves were themselves enslaved, bound to the devil obligations they had accepted in exchange for gifts of power.

I looked at my players’ inventory. They had taken a very powerful magical halberd from the fish-men. I decided that the dwarves had fought a long underground war with fish-men and lost. One of their great heroes had been lost together with the halberd. And obviously it was the chain devil that had presented the dwarves with the halberd. Maybe the old dwarven king had been kidnapped, devil agents had tricked the dwarves into starting the war, and then the devil itself had given the halberd to their greatest hero to lure him to his death. Excellent!

I named the chain devil Ygrorin, the captain of the dwarves Feznior, the lost king Rilog, and the evil priest Greknor. I looked at the map and noticed the lair of Vazhkan the beholder nearby. Aha! I liked the eye-kin idea I had seen in The Complete Guide to Beholders by Keith Baker, Neal Gamache, and Matt Sprengeler. So the real priest of Marduk, the god of lightning and law in my campaign, had been replaced with a dwarf that had been given eye stalks by his beholder overlord. This dwarf got the title of Eye Council.

The captain of the dwarves needed a powerful magical weapon. I wanted something that had a strong relation to Marduk’s lightning theme. I settled on a glaive called Marduk’s Betrayal that deals electricity damage, and a lot of extra damage on critical hits. In the main temple of the fortress there would be a statue of Marduk, of course, but chained. And the chain devil would have taught the dwarves how to “chain Marduk and take his power instead of begging for it.”

I was also inspired by the following passage I had seen on the RPG Dumping Ground blog by Mark Thomas: “Dwarves are defensive and isolationist. Moria is riddled with defensive fortifications and stonework tricks and traps. Each Hall and Deep can be locked down and isolated from the others and secret tunnels and doors allow flanking maneuvers and troop movements without enemy interference.” – Return to Moria: Next Steps

I didn’t want to map it all, so when the players were able to convince the guard Piezka to let them through, I improvised five clans: Fist, Bolt, Pick, Ring, and Axe. Since Eye Council Greknor belonged to the Ring clan and captain Feznior belonged to the Bolt clan, I decided that convincing the two leaders of these clans was going to be harder. Every clan had different traps protecting their sections (secret poison dart traps, narrow bridges over spiked pits, a passage along a deep moat with the wall hindering the sword arm, a labyrinth of stairs, dead ends and false secret doors), but since the party had entered the fortress magically disguised as dwarves, they talked their way through to the first clan leader. For the remaining four clans, I asked the players whether they agreed to just do a Diplomacy or Charisma test to get an audience and another test to convince the clan leader to speed things up.

I had picked some monsters in case the players decided to find a really fancy underground passage into the fortress, and I had written up a little table to use for a Confusion spell I expected inspired by the Pathfinder RPG rules, I think.

The map doesn’t really allow us to do a room-by-room exploration. It just allows me to quickly improvise the transitions between scenes such as from the gate to the upper and lower market, to the armory, into the various clan holds, and finally down into the great hall. This is also where the big fight took place once the players had gotten promises from two of the clans that they’d make sure to delay any reinforcements and that they’d protect them after the deed – the deed being the slaying of Eye Council Greknor and the chain devil Ygrorin, of course.

The half-finished lair for Vazhkan never got used, the treasure was improvised on the spot after the fight, and I used ordinary dwarf stats from the monster manual except for the bad guys in the final fight. Plot hooks for future adventures include the source of eye-kin in the area, who will rule the Red Heart Fortress, the role of the renamed magic glaive in the area, the fate of Remboruk the whip and chain wielding slave master who was not present when the chain devil was killed, the fate of the lost king Rilog, and the fish-men in the area.