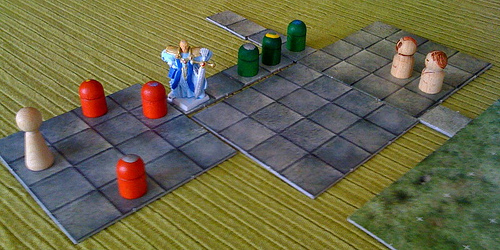 I run an old school Labyrinth Lord game with no battle map and Shields Shall Be Splintered and Death and Dismemberment house rules. Last Wednesday the elf Teeha lost an arm and a leg. The player wants to keep playing him anyway.

This simple question before rolling the die worked really on Wednesday. You can have a Boromir taking all the hits and you can have fools being deserted by their fellow party members using this rule. I think I’ll keep it.

I like how this reduces the entire battle map minutia to a single strategic question: will you protect your friend right now, right here?

The image shows how I run D&D 3.5 battles since I ended up not using my No Battlemap house rules. There were always enough players that preferred those super detailed fights.

This really worked well. Staying in the back really paid off for Dellinorm …