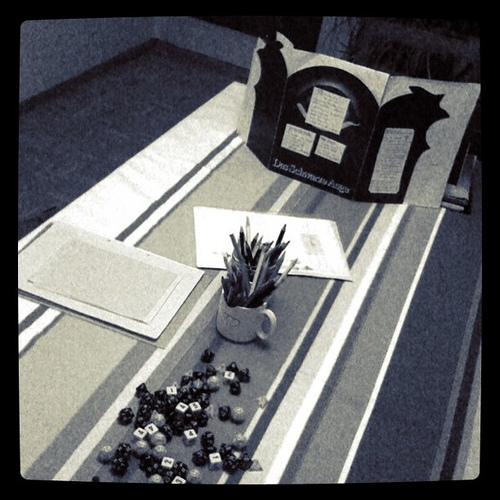 I posted the following as a comment to Rob Conley’s blog post How to manage a sandbox campaign which itself is a reply to other recommended posts regarding sandbox play. Basically, Rob suggest a one on one session with every player before the campaign starts in order to provide players with backgrounds, connections, and thereby with personal goals.

I discovered sandbox play to be my favorite style but I also intensely dislike front-loading characters with info (except rolling on the B/X Headgear table, perhaps, or my Character Generation Shortcuts table) and the one time a GM asked me for a one on one session that basically sent me into a two week mental freeze. I just could not imagine an hour or two with a one on one session before the “real” game starts. I’m there for the table full of RPG nerds talking and laughing—and talking an hour about my character seemed like homework in comparison.

I quit that campaign before it started for other reasons, but friends tell me the one on one session they had was not awkward. I guess this is a very personal dislike of mine. But the fact remains that I feel my sandbox campaigns (one group in the Lenap region and two groups in the Sea of Five Winds region) work without providing my players with this sort of one on one character front-loading context.

I think the reason is that I start the campaign with a mission for the party. The sandbox nature then allows the players to do it, reject it, rebel against it, subvert it, etc. And if they don’t, well there will be another mission until they start pursuing their own goals. I just need to avoid the time pressure of impending doom that pulls players onto rails even if they’d prefer not to.

In my Alder King campaign, the game started with the Alder King asking the players to do something against the human loggers tearing into his forest, and he suggested three missions: investigate the village Delan in the west, spy on the evil local lord in his Forest Bight Fortress in the east, or visit the newly arrived flying monkeys in the north in order to turn them into allies. I had just prepared a little something for the six surrounding hexes in true Microlight Campaign fashion, with the opening scene basically reducing the options down to three.