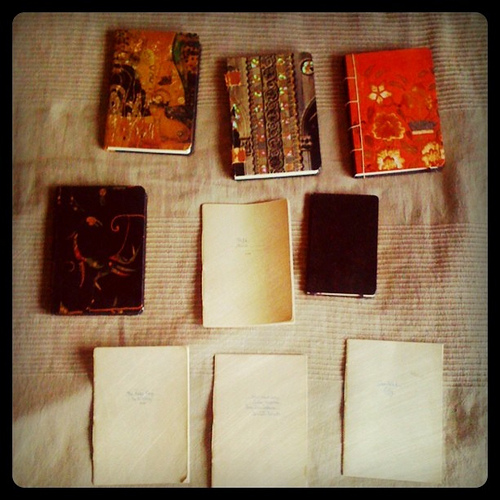 The following developed out of a discussion on Google Reader regarding Rob Conley’s How to manage a sandbox campaign: The Box of Stuff. A friend started the discussion by saying more or less “I miss techniques that can help a GM improvise – except for random tables which have been discussed a lot. What other tools are there?” My reply turned into the following list of lists.

Random encounter tables have been discussed before. More generically, I prefer to organize my “stuff” in the form of lists. Keep these on index cards if you like. I keep meaning to do that, but I’m too lazy so all of this just ends up on pages upon pages in my little campaign notebooks or on my campaign wikis.

Here are the kinds of lists I keep. Usually these act as todo lists, not as tables to roll on.

Also, watch a lot of cheap movies and read a lot of science fiction and fantasy books. 🙂

From my replies on Google Buzz: Interesting ideas. Reminds me of Apocalypse World and its “fronts”: You assign everything in the game world that does not belong to the players to a set of fronts, each on one front sheet. Each front has theme (like “hunger”, “revenge”, “disease”) and a separate internal dynamic with projected next events. Each time the group interacts with a part of a front the GM improvises a reaction based on the stuff written on the front sheet and the front’s theme. A front my be an abstract thing only for helping the GM or it may be a concrete game entity like a faction or an arch-enemy.

I should add that in Apocalypse World a front also has a discreet locality and that the themes are tuned to produce emotional involvement. But in another type of play those aspects may be handled differently.

Comparison: A front in AW: A nearby desert may be a front themed “thirst” and contain a rival gang of semi-zombies thirsting for blood and also an underground bunker with nuclear-powered water pumps that drain away the group’s water source. A front in Regular Fantasy Campaign: A nearby swamp is a “decay” themed front with a flesh-decaying disease emanating from a temple-ruin and a tribe of local troglodytes that, under the influence of the disease, turn aggressive and raid surrounding villages.

There is more to fronts mechanically, but I’d have to read that chapter again to say more.

I just bought AW yesterday because people told me about the “counters”, implicit timers that are forwarded by certain events or “non-events”. It’s simultaneously a timeline and a pacing device. I have to look into those, they seem to be useful.

Something similar to counters that I use in my own campaign is a variant of this:

It’s a simple way to make the world alive, to have each faction progress in a natural way...