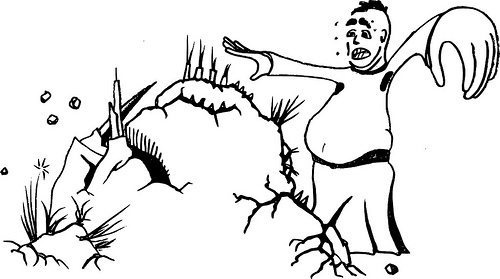 I’m posting it here because I’ve mentioned it on Google+ for the third time, today. It all started with Zak posting about Evolution. He lists some well known role-playing games and shows that each one of them offers some sort of long-term promise of change for players. His point: every session produces “changes in that session”, but the really successful games promise “a specific kind of change will occur over the long haul.”

I think it’s also one of the reasons that Traveller can be boring. At least it didn’t hold a long-term appeal to me when I ran it. Perhaps I should have imagined the long term changes to the game play (more and bigger ships, get involved in the war) instead of focusing on changes to the setting (in my campaign, small colonies were being resettled or exterminated by the players – at the time I felt this was already a big step up). I feel like I should give Traveller another try soon.

I think Zak’s spot-on when he wonders whether campaigns using relatively simple rules have a hard time maintaining a long term appeal. For example, I claim that the long list of non-general spells with their non-linear progression of power create the long term changes over time. But what will you do in a simpler indie game? What will I do with my Solar System RPG game? Over time, I can add more gifts (feats, stunts, powers), but there’s really no promise that I will keep delivering. Plus, if I do, I’ll have to invent it all myself.

This is the key part: I have to come up with it myself – and I need to foreshadow it, make sure my players know it, want it, work towards it. In D&D, it’s simple. There’s a big Monster Manual full of critters in the book shelf. There is a big Players Guide full of spells right next to it. And there’s a list of magic items hidden away somewhere. You want to fight all this crazy stuff? Sit down at my table! That’s the promise the game makes without me saying anything at all. All the players sitting down at my table knowing the game cannot be faulted for assuming that this is going to be a big part of the game.

The Solar System campaign I’m running and the Barbarians of Lemuria campaigns I’m playing in are awesome. We’ve had a dozen sessions in each of the campaigns. They have enough potential to last us at least half a dozen more. But I think that’s because of the setting, the scope of the current plot, etc. What we don’t have, as Zak puts it, is a system that promising that “a specific kind of change will occur over the long haul.” The onus is on us, the table, to make this promise, to foreshadow it, to work towards it, etc.

In other words, it’s on us to foreshadow mechanical changes (new gifts, feats, schools of magic, spells) and new modes of play (land owning, castle building, plane hopping, politics) within the campaign. The system and the tradition around it doesn’t do that like D&D does.

Here’s an example that I’ve come across twice in recent days: people propose a change to the D&D magic system; they want to make all the spells are available from the start. This is how spells work in HARP: more powerful variants just cost more power points – my second level mage, for example, has haste and fly as his two spells. Using the above observation, I must assume that these proposals remove the distinct modes of play I like so much. Any player character might have the necessary spells right from the start. As far as I’m concerned – and this is where the value judgement comes in – these proposals are taking away something I liked. What are they going to give me instead? If the answer is “more flexibility” for my character, then I feel that this change isn’t worth it. It might work for others, but I fear it won’t work for me. If I had wanted more flexibility I would have picked more flexible rules. Something with skills and point buy instead of classes and random ability scores, for example.

How much of this “promised longterm change” do you think is necessary? 3.5e and 4e really shine in that regard but what about all these OSR games? Searchers of the Unknown Is pretty cool but certainly doesnt promise anything and also stuff like LL with its rather small spell selection and only with a short blurb about what happens at name level seems to fall into the same place as many indy games. Does a game need a huge amount of source books to be able to deliver on the promise of change?

I don’t think we need a lot of source books to achieve it – in fact I think Labyrinth Lord is close to the minimum. It has changes over time in a couple of dimensions. It has changing dynamics for some classes: start slow as an elf, start weak as a mage, have a level cap as a halfling, etc. It has enough of the game-changing spells: invisibility (2), fly (3), dimension door (4), teleport (5) to name the ones I am most familiar with.

I agree that it doesn’t offer rules for strongholds and mass combat like the Rules Cyclopedia did or like Adventure Conqueror King promises.

_Searchers of the Unknown_ doesn’t have rules to differentiate races and classes as far as I can tell. No level caps, no different XP requirements, no spells, no specific abilities (those abilities contribute to the long term changes in that they are very important at first but loose importance as the characters gain levels).

Now, I think that the game master can make the same promise. First we’ll run errands for the Jarl. Then we’ll travel south for a long time. We’ll be pirates of the seven seas. And then we’ll infiltrate a secret society. It sounds great, I’m in. The difference is that I can’t read the rule book and think “this is going to be great.” I need to trust the game master to pull it off. And if I’m a struggling game master, the system doesn’t encourage me to change my game. This may increase the risk of the campaign stagnating.

Ian Burns wondered Character advancement in RPGs, how important is it to you? I said:

I think character advancement is illusionary if your monsters just keep growing in power. I was thinking of The Elder Scrolls IV: Oblivion. I think that’s what D&D does right: As you advance in levels, gameplay changes. AC doesn’t grow as fast as attack bonus. New spells. Save or Die gains in significance if you have more hit-points. That is why I like D&D character advancement: changing gameplay over time.

Another advancement style I like is the FATE style where “advancement” is actually just slow changes in your character: swap skills, swap aspects, that’s it. It’s much less effective than the D&D style, because the gameplay stays essentially the same.

Another advancement style I like is the Traveller style where characters stay the same but one way of playing the game involves earning a lot of money and buying better equipment. In a way, D&D has this as well in that magic items start to replace leveling up as your method of advancement.

(The statement is basically my takeaway from the main post where I said I should give Traveller another try and emphasize changes to the equipment over changes to the setting.)

I just reread a post by Justin Alexander: The Subtle Shifts in Play. There, he offers the following summary at the end:

As you play D&D, the game /shifts/. At 10th level you aren’t playing the same game you were playing at 1st level.

If we consider this narrow slice of the game, D&D basically used to say: “Okay, you start out exploring a nearby dungeon for 2 or 3 levels. Then you start exploring the wildnerness and you have to really focus on how to make those explorations a success — supplies, navigation aids, clear goals, etc. We’ll do that for 3-4 levels and then, ya know what? I’m bored with that. So we’ll keep doing the explorations, but we’re going to yank out all that logistical gameplay, replace it with some magical resources, and start shifting the focus of wilderness exploration to staking out fiefdoms and clearing the countryside. We’ll do that for 3-4 levels. By that time you’ve probably transitioned pretty thoroughly into realms management, so we’ll just give you this /teleport/ spell and we can probably just phase that ‘trekking through the wilderness’ stuff out entirely.”

Arcandio wonders: Is Crunch Required for Long-Running Games? I don’t agree with his analysis: for me, leveling up does not feel great. The leveling up is not the thing I enjoy and when I played in that Pathfinder game where we gained a level every single session, I was not excited, at all. And more specifically, I don’t think that games “benefit from having crunchy, detailed rules, at least as long as they’re intended to be played for longer periods.” I think that sometimes the detailed rules can provide the promise of long term change, but like long lists of specific spells, specific monsters and specific magic items, they don’t have to add to actual rules and require only minor, additional “navigating the rules”. I recommend looking at the blog post and thinking it through for your own games, though. Perhaps it’s a better fit for you than for me?