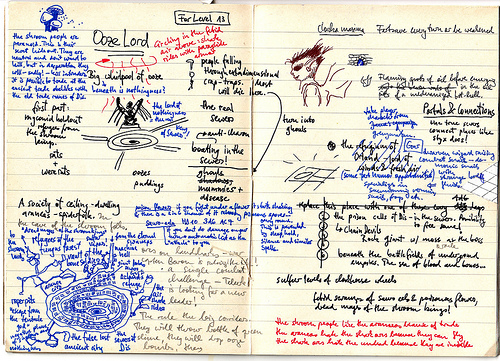 initial sketches for this dungeon level

I’ve written a dungeon level for the Fight On! megadungeon. It’s for level 13. Maybe it’ll be in issue #13. I tried to adhere to a number of principles that would hopefully produce a better product.

As far as I’m concerned, high level play suggests the following deviation from the usual:

There is no map with exact distances. In fact, like the other dungeon levels at a similar depths, my entry feels like a little underworld wilderness.

I assume that many party members will be able to fly or dimension door or have flying mounts or flying carpets. Thus, there are several vertical drops that would make life very difficult for a low-level party.

Since I don’t have a traditional map, encounters are presented as simple lists of locations and creatures. You can treat these as a wandering monster table, except that every entry in the list comes with monster stats and an environment and a little extra info. Personally, I prefer to get a little more information than just a monster name and their numbers appearing.

In order to further aid improvisation every location starts with a sentence or two setting the mood, a list of impressions (sounds, sights), a list of names to use—little things that I’d appreciate as a referee.

Enemies will have access to magic. I still remember hating spellcasters and devils and demons as a kid because picking the right spells and all that was tricky to do in the heat of combat. This is why important foes will often have two or three at will magic abilities. It’s simply easier to manage.

Since I was going to publish in Fight On! magazine without the Open Gaming License, I decided to not copy any stats from monster manuals or existing rule books. I made up the stats of all the monsters. I’m sure this will result in strange discrepancies. I used the following rules of thumb: mooks 1 HD, squad leaders 3 HD, local leaders 5 HD, important people 7-9HD, boss enemies 12-15 HD, some monsters that you can fight but that you’re better off avoiding 17+ HD. AC 9 for no armor, AC 7 for tough hides, AC 5 for chain and equivalent, AC 0-3 for superbly armored enemies. Damage is usually 1d6, 2d6 for magical two handed weapons or large creatures with a huge jaw, 3d6 for the strongest natural enemies.

In order to reflect the changing dynamics of high-level play, there are a lot of save-or-die effects. At this point, hit-points aren’t so important anymore. Save vs. paralysis or be dragged under water; when under water, save vs. death every round or drown. This is what makes fighting the monsters dangerous, and this is why there are a lot of monsters with few hit dice down on level 13 of this dungeon.

A while ago, I had written a blog post called Quality Dungeons. I wanted to apply some of the lessons I had learned from reading 200+ One Page Dungeons.

Every location has an interesting non-player character or two. There are factions at war. You can make allies. (In fact, all the dungeon levels I can think of for the Fight On! megadungeon had this. I love it.)

I tried to loosely tie all the locations together. If you’re using the entire level, that’s cool and there’s a lot of interaction. At the same time, it’s possible to reuse every single location outside of the dungeon in your own games. It’s modular because I like to reuse other people’s stuff.

I use bold to highlight monsters and important names in the descriptions such that it’s easy to skim.

I tried to keep it short. Unfortunately, it’s still nearly 30 pages long. I asked Claudia for editing suggestions but she says she likes it all and she wouldn’t change it. We’ll see whether I managed to condense it down to the most awesome per word I can deliver! It was certainly my goal.

A little trick I used: I forced myself to write many things as bullet point lists. Every encounter is one item, one paragraph. In addition to that, I don’t use periods in my list items; I use semicolons to structure it; this forces me to keep a certain flow while writing; I realize it’s not a great way to write a blog post, however. 🙂

I also tried to provide foes to fight, non-player characters to talk to, befriend, learn from and barter with. These last elements supports my wife’s favorite play style: discovering new things. You can exchange spells with magic users, there are rituals to learn (in campaigns, that is how I explain all the magic that is unexplained by the spells provided by the rule book) and there are things to learn about the environment.

There are opportunities for long term change. I’m not just talking about loosing limbs (although that may happen as well), I’m talking about divine effects following you around if a god notices your actions, infernal pacts you can make, that kind of thing.

There are also safe zones (although when I ran a play test the players burned down one of the safe zones) for players to rest and recover without needing to return to the surface. I just like to imagine that trips to the underworld are long and arduous, much like Jule Verne’s Journey to the Center of the Earth.

I also tried to provide some links to the other dungeon levels in this megadungeon, but perhaps that is the one aspect where I could have tried to do better and add more tie-ins. To my chagrin I must confess that I haven’t read all of them in as much detail as I would have liked.

Another thing that I have failed to do for now is to calculate how much experience points I would want the party to gain on this level and distribute appropriate treasure hoards. Maybe I should do that now that I’m done and do it. Assuming that a fighter needs about 120’000 to move from level 13 to 14, that would mean that I’d need about 120’000×4×3 (providing triple treasure since they’ll probably miss a lot as well). I’m not sure... At the same time, I feel that once you’ve reached name level and beyond, the actual numbers don’t really mean that much anyway. I could be wrong. All I know is that I probably haven’t distributed 1.5 million gold pieces on this dungeon. Should I?

Sorry for the spoilers, but: IT WAS SPIDERS! Of COURSE we BURNED THEM DOWN!

Maybe I was under the influence of A Deepness in the Sky when I wrote that part.