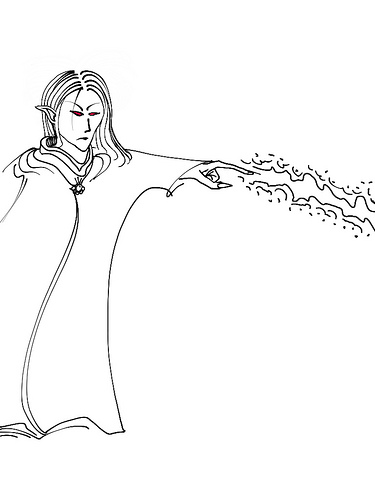 2½ years ago, I listed old school fanzines I knew. Does the Scribe of Orcus still exist? I guess it was never officially cancelled but these days other publications have sprung up.

Four of them are available via Lulu! I usually wait for a coupon that offers free ground shipping and order then. If I don’t do that, I’ll have to pay an extra 50% for shipping to Switzerland.

Fight On is my favorite of the lot. I contribute to this one. You’ll get between 80 and 120 pages of content four times a year. It is published by two pseudonymous persons called Calithena and Ignatius Umlaut. The reason I like it so much is that Fight On is an eclectic mix of things, much of it clearly the work of referees like myself—it’s the kind of thing that looks like it was written by people like me for people like me. The magazine tries to cater to the entire Old School Renaissance with an occasional Tunnels & Trolls or Tékumel article. Most of it is for old school D&D with DC (defense class) being the equivalent of AC (descending armor class).

Knockspell is a smaller, cleaner fanzine, mostly for Swords & Wizardry published by Matt Finch. I bought several of the issues in print (#1–#3, #6).

One of the reasons for buying Knockspell in addition to Fight On are the Formalhaut articles by Gabor Lux which appear in both magazines. I love them!

Another thing of note is that Knockspell uses the Open Gaming License whereas Fight On provides no license for its readers. Unfortunately, many of the Knockspell articles will say This article contains no Open Game Content other than spell names, magic item names, and terminology derived from the game rules or The rules described in this article are Open Game Content, and the remainder is Product Identity, thereby negating the benefit to readers.

Oubliette is published by a small circle of people around Peter Regan and seems to target Labyrinth Lord players. I’ve recently read a review saying that the author appreciated the distinct voice. I loved the crude and direct artwork by The Marg. All of the artwork done by the same artist certainy strengthens it’s unique voice.

I must confess, however, that I never really sat down and read through the compilation of issues 1–4 I had bought. I can’t really tell you why. Somehow there was always something that seemed more appealing. I keep meaning to return to it, but it just sits there on my shelf…

The compilation I own uses the OGL and declares some names to be Product Identity. Everything else is presumed Open Gaming Content even though it never says that explicitly (failing section 8 of the license).

NOD is published by a single person, John M. Stater. It is advertized as being “compatible with Swords & Wizardry and other old school games.” There is much less art in the book, some of it old public domain images, some of it photos used with a Creative Commons license. I bought it for the Asian hex crawl in issue #8 (and bought #7 in order to have something else to compare it to). I really liked the previews I was seeing on his site and I also liked later previews of his hexcrawl in hell.

Once I got the issues, however, I ended up not reading them because they were large and didn’t seem to be immediate applicable. I’d have to start a new campaign in one of the hex crawls! Much like the Wilderlands of High Fantasy I would then use the hex descriptions as a seed to create adventures for players living in the area and build from there.

The license used by NOD is the OGL with very strong restrictions: basically only new spells and new classes are completely Open Gaming Content. Everything else is either Product Identity or only partically open, eg. only the magic item names are open.

We’re truly living in a time of old school plenty – I am overwhelmed by all this stuff! It’s awesome and I think it works much better for me than the beautiful last copies of Dungeon magazine. Those magazines were so polished, they always looked out of my league. These fanzines, on the other hand, look much more like the stuff I might have written myself. It encourages me to contribute, it encourages me to run my own stuff instead of longing for the professional editing and the color explosion of fantastic art. And yet, it’s jst as useful at my gaming table.

Ironically, I want these magazines to succeed, I want to read them all, I want to use them all, but it seems to me that I don’t actually need all this text. It takes longer to read all these fanzines than it takes me to write up new stuff that is truly mine. I feel conflicted.

My suggestion to any readers is therefore to look through the free issues and figure out which fanzine you like the best and just buy one of them. For me, that’s Fight On! but as you can see I don’t really have any good reasons for picking one over the others.

Also, I’d love to see more permissive licenses. I hate hate hate extremely broad declarations of Product Identity. You got an entire game for free and now you’re being stingy with your own contributions? Gah!

Loviatar is very small, written by Christian Walker, and mailed directly to subscribers. He says “Getting cool mail is so rare. Bills suck!” No Lulu!

Encounter is an electronic fanzine. I’ve read through the first two editions and enjoyed them a lot. Unfortunately I’m not much of a PDF reader—I prefer print if it’s going to be used at the table and when I’m using my tablet, I prefer to waste time reading the blogs, Google+ and Twitter. (If you’re looking for some old school blogs, take a look at my Old School RPG Planet which collects a lot of them.)

As it turns out, now that I check their website, the last issue was published in April 2011. Oops!

Oddities came and went in 2010… Did Unknown Sagas ever make it?

Do you know of any other fanzines? I know that Pathways is a fanzine for Pathfinder players.

I heard that Tim Shorts of Gothridge Manor is working on another little fanzine in the Loviathar style called The Manor.

Compare this to the situation back in 2008.

Thanks for the mention Alex. Been plugging away at it and hope to have the first issue out in a couple of weeks. The one magazine I also liked was Oddities. I think I am misspelling it. But thought that was another good one.

Sorry Alex, I see that you did mention it. I am going to blame my pup attacking me while I was reading for my misread.

I love the image of bloggers trying to comment while being attacked by pups! Pups for the win. ✌

Thanks for the pointers! That reminds me of Infinite Stars...

Just found this: Back to the Dungeon Vol 1 Must add it to the main page.

Thanks for the mention, Alex. Issue 3 of the Wizards Mutants Laser Pistols! fanzine is out now and No 4 should be coming out sometime in January.

Excellent news! I’m still hoping for Fight On! to make a comeback… 😢 — finding other magazines to be thriving is welcome news. 👌

I heartily agree with you in regards to Fight On! Such a fabulous magazine...I can’t bear to think of it as gone. I’m still hoping for a return, and for that “big book of random tables” Cal was planning.

Aye, thanks for having & Magazine on here! Why did I see one that said 7 issues (which is correct) and this one says 5?

I’m sure I’m doing something incorrectly. 🙂

Sigh, I’m such a dope sometimes.

Hey thanks for the AFS magazine mention Alex. And, I would agree with many of your assessments. Game On!

Congratulations on this review by Bryce Lynch.

Interesting blog Jeremy. Thanks for the link. Be well!