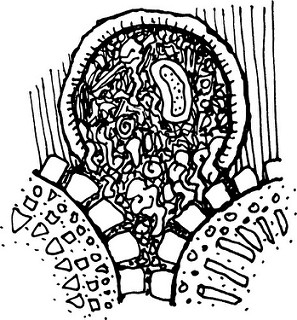 What motivates a referee? I think positive feedback is a key element. I’m not just thinking of players thanking you for running the game or players saying that they like your style. What I really enjoy is players who get excited when they’re thinking of the next session, players who’re sad if they have to miss a session, players who tell other people about the funny things they did, the terrible things that happened. Player engagement is intoxicating, infectious.

DM Peter recently ended one of the campaigns I’m playing in, citing lack of player engagement. It’s a tricky subject: who is responsible for it, how do you measure it, how do you foster it? Here’s what has worked for me.

Alpha players are always at the forefront of everything. They edit the campaign wiki. They write a log. They never loose track of their character’s experience, wealth, equipment and encumbrance. Their characters have plans. Their characters have issues. If you get one or two of them, that’s great. I found that my games can take a lot of casual gamers, however. Not everybody needs to be an alpha players. Quiet people, hard working people, parents, people with little time between sessions are just as entertaining at the table. Realizing this has made it possible for me to enjoy more games. If I need more games to fill the time between sessions, I run more games or join more campaigns.

Session reports are a measurable by-product of our games. Long session reports that cast the events in a mythical light, provide more intimate glimpses of the characters, provide extra details and entertaining complications are great. There will always be players that don’t have the time to write such session reports and there will always be players that don’t have the time read such session reports. Preposterous, you might think. And yet, this thought will set you up for disappointment. If one person keeps a few notes on the back of their character sheet and can bring everybody back up to speed at the beginning of the next session, that works just as well. Realizing this, I have cut down on my session report writing. These days, I don’t write to entertain, I write to remember. A short list of events is all that is required. Now I no longer feel close to session writer burnout, I’m no longer disappointed by the disinterest of my fellow players.

Player contributions are an inspiration: I try to encourage players to contribute little elements to our fairly traditional game. Sometimes the personality traits of a player character turn out to be the personality traits of an entire culture. Sometimes the ambitions of a player can shape an arc of the campaign. Sometimes, however, none of the players seem to be willing to contribute anything other than playing their character. In this case, a referee might feel cornered into the role of the untiring entertainer, a thankless job of crafting adventures for unappreciative players. This can be deadly for a sandbox campaign. I have found two solutions to this problem in my campaign:

Addictive elements to game play. Yes, it’s mean. It’s called the variable ratio reinforcement schedule: a reinforcement schedule in which the number of responses necessary to produce reinforcement varies from trial to trial, according to Wikipedia. I feel that’s why unbalanced encounters are fun. There can be two or three sessions where practically no treasure is found and characters gain less than a hundred experience points each and other sessions where the major hoard is found and each character gets a thousand experience points or more. Knowing this puts some of them on edge. They want to make sure not to miss the one gold session that will pay off big time.

I hope these points help you adjust your expectations and help you increase player engagement in your campaigns.

Nice write-up. Have ever thought about what keeps you at the table as player?

I suspect it can all be found somewhere on this blog, hidden here and there… Perhaps How I Roll might be a good starting point, although it collects a lot of stuff from a referee perspective.

Thinking back, this is what I would say based on the last few years.

Given this list, I think previous “tests” telling me I was mostly a storyteller were plain wrong and didn’t account for the kind of game I like.

What about ambience? Do you care for stuff like flickering candles and matching music or not at all? The fact that you didn’t mention this point and that I haven’t seen any of this in one of your games might give a hint, though

Do you think these things can help create an intense gaming experience and keep the players focused on the things happening on the table?

I do not think that candles and the like would improve my game experience. It would be fun if somebody else organized it and it would be fun, but it would be unrelated fun. As for music, I have music playing in our appartment practically nonstop. That’s why I like to play movie or game soundtracks in the background. I don’t think that preparing particular tracks for particular scenes is worth the effort, however. Whenever I tried it, I was distracted and felt stressed out. What I like to do as a player, however, is to keep the iPod nearby and switch tracks to something appropriate every now and then. As a player, I have enough down time to be able to focus on the music. The only scene where this visibly helps, however, is when I switch to some droning Lustmord just as the party is confronted with ancient evil… I did that to good effect a handful of times.