Reading the Dungeon World chapter on fronts makes me want to rewrite the list of open plots and the todo lists for a quest or two, and the list of random upcoming campaign changes as fronts. Perhaps that would make all these things clearer to me. Now that I think about it, my campaign threats are a confusing mess of half baked ideas. They work – I think – but perhaps they’d work better if written up as fronts.﻿ 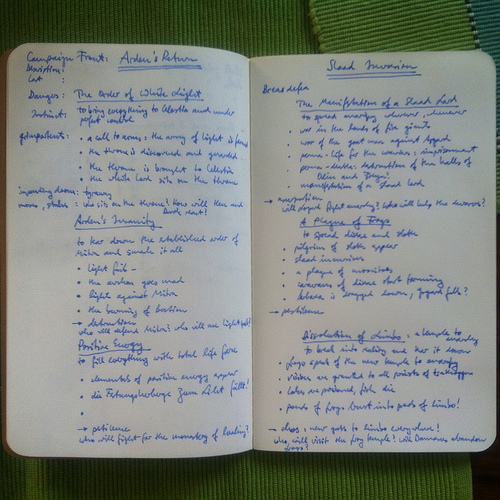 See the picture on the right for what I have for my campaign fronts. I probably have one or two more which I don’t consider to be a urgent. One thing I noticed is that the old structure of my notes was this: if you want to resurrect Arden, you need to do the following… and what followed was a list of quests, each of which I felt would make a nice adventure, should the players decide to follow up on it. The write-up as front changes the setup: if players don’t resurrect Arden, his insanity will spread, somebody else will take the throne of light and so on. I’m not sure I like this shift from “this is a sandbox and whatever you want to achieve will be full of adventure” to “the world will go from bad to worse if you don’t take matters into your own hands”. I suddenly feel like might be preparing two or three campaign arcs or adventure paths… a kind of campaign setup I tried to avoid because players end up feeling like they have less choice. Everything is falling to pieces and there is pressure everywhere and time is running out and go, go, go!﻿

This seems to be the biggest difference in terms of how fronts work compared to my traditional preparations. In my sandbox, players get interested in things, they learn more about it, they formulate goals and then they discover all the difficulties that need to be overcome. The world is essentially static.

Sure, we like to talk about “living” sandboxes and all that but my campaign events are random intrusions where I think to myself, “an invasion of mind-flayers sounds great” and then the setting starts to change.

This process is less structured than the fronts of Dungeon World. Fronts are also tied into moves, so a failed roll by a player can advance a front.

No such thing happened in my sandboxes. People felt free to calmly consider the missions they care about and do some horse trading: “You’ll help me bring down Susrael and I’ll help you bring back the fire giant’s wife, OK?” Fronts put pressure on players and I don’t think they’ll feel as free to pick and choose because there will be consequences, always.﻿

Comments here or on G+.

As Dungeon World is on my mind these days, here are two links that made me buy all the PDFs: a review of Perilous Wilds by Ramanan S. and Test-driving Dungeon World by Brendan S., to bloggers I respect, not only because their last name starts with an S.