I’ve been thinking about Dungeon World some more. Here are some of my comments from a recent post on Google+.

It all started with me reading the answer to How to ask nicely in Dungeon World on StackExchange. The answer says: There’s also no GM move called “have a freeform social interaction.” If the GM is following the rules, this kind of stall should not happen. […] Since the “everyone looks to you to find out what happens” trigger matches, it’s now the GM’s turn to make an appropriate move, instead of falling into “time for unstructured social exchange improvisation!” habits that they have brought with them from some other game. The rest of the answer picks all the GM moves in the book and provides an explanation of how it might have gone.

When talking about my classic D&D games with others, we sometimes talked about procedures (or the lack thereof). When I tried to explain how great classic D&D was to Lior oh so long ago, he said that he would love to see some practical instructions on how to make a game interesting. Classic D&D seemed to be steeped in oral culture transmitted outside the written rules. You learned how to do it from friends, or through years of experience, or by reading and talking about it online (which is how I finally got it). As we gave Apocalypse World a try, it seemed to us that there was something here about telling us how to run a game but we just couldn’t nail it. I don’t remember whether we were just too blind to see, or too distracted by all the new jargon, or too fascinated by the moves in play books. I think that now, I’m slowly starting to get it.

There are still reasons not to like the game. The game no longer promises ever changing game play via mechanics (spells changing the adventures you can run, hit-points being replaced by saving-throws, and so on). And I still don’t quite see how the game can surprise me – how will I avoid making decisions that I feel the rules should make for me? The advice for running a dungeon basically suggest improvising a dungeon based on moves, i.e. whenever the players are at a loss, or when they fail their rolls, the dungeon grows, the monsters move, dead ends appear, signs of trouble ahead show up, and so on. “Dungeon Moves are a special subset that are used to make or alter a dungeon on the fly. Use these if your players are exploring a hostile area that you don’t already have planned completely.”

Even if I use The Perilous Wilds as my rules, these thing are still true. Except now there are more tools to work with, more specific instructions: countdowns for themes, a predetermined size, and so on. It seems to me that DW and friends are very interested in “play to see what happens” and one of the consequences is that the world is being generated as you go, based on your moves and the improvisations of the DM. That, in turn, is perhaps why my suspension of disbelief might not work as well. Or perhaps that’s simply a problem for an old school D&D player. If we’re exploring an existing place with an existing map, and existing dangers and treasures, it feels more “real” than generating things as we go. If the consequences of failure are generated by random rolls on a table, if the danger of monsters depends on the severity of my moves, then the rules can say fiction first as long as they want, I read it as DM fiat. But: This could be my D&D bias. Perhaps DW does not shirk from DM fiat as long as it follows from the fiction. Perhaps it works at the table even if everybody knows that the DM is improvising. After all, D&D also requires improvising but generally DMs will try to hide the fact that they’re doing it. The impression of impartiality is generated by dice rolling. Staying true to the fiction is presumed.

Then again, when I look at some of my recent “dungeons”, I find that I mostly think of them as interesting areas, connect one way or another, it doesn’t really matter. Plus monsters and treasure, and traps, rarely. Perhaps that’s not very far away from what Dungeon World and friends are suggesting. After all, the improvisation and dice rolling at the table is only for “a hostile area that you don’t already have planned completely.” I’m suspecting that – at the table! – my current method and the Dungeon World method with a little planning are not very different, after all.

Curious and willing to learn, in any case.

This is what a recent dungeon map for classic D&D looked like, in my campaign: 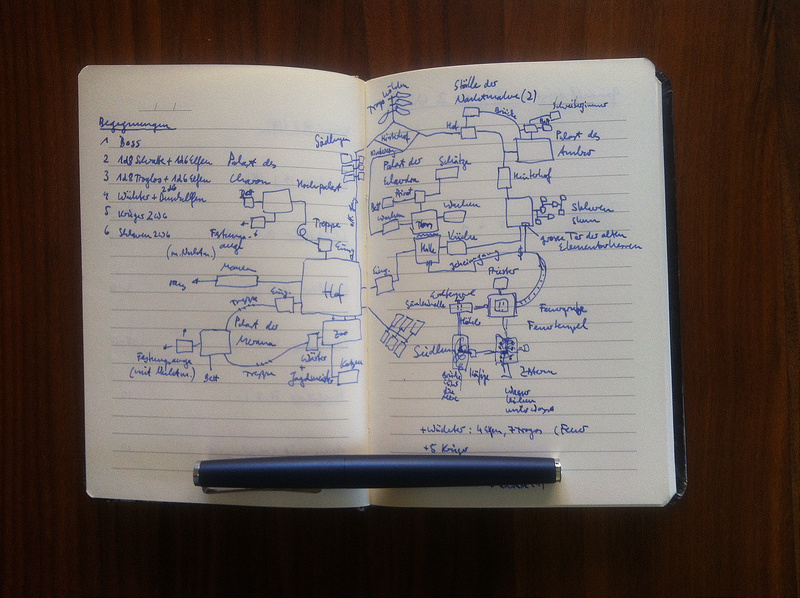