Epistemology is the theory of knowledge, and what I mean by epistemological tension is that sometimes we know things that are at odds. Many people, me included, have a tendency to try and resolve this tension in story telling, in world building. There is one calendar and it is rationally constructed, even though the rationalisation of calendars was a long process in our world and some would claim it still failed.

That which is called Álfheim is one, where dwell the peoples called ljósálfar [Light Elves]; but the dökkálfar [Dark Elves] dwell down in the earth, and they are unlike in appearance, but by far more unlike in nature. The Light-elves are fairer to look upon than the sun, but the Dark-elves are blacker than pitch.

At the same time, Wikipedia says:

Scholars have noted that the svartálfar appear to be synonymous with the dwarfs and potentially also the dökkálfar (”dark elves”). As dwarfs, the home of the svartálfar could possibly be another description for Niðavellir (”dark fields”).

I guess what I’m trying to do is to talk myself into accepting that there is no easy solution to the conflicting ideas. As Wikipedia puts it:

The problem is that both Nidavellir and Svartalfheim are mentioned, and it is unclear if the sixth world is a world of dwarfs or one of black elves.

So I’m going to conflate Svartálfaheimr and Niðavellir and call it Myrkheim and call its inhabitants dwarves. That’s why I’ve still got a ninth slot available. 🙂

The elves we know from our D&D games, those weirdos with pointy ears, long lives, and the ability to cast spells, I’m going to keep them as-is, essentially wood elves. They are the first travellers, those who named all the things, taught creatures to speak, to sing, and to cast spells, who learned from the dragons, and so on. They can be found everywhere. Some Tolkien influence, there, I know.

There also exists a related group of super elves from Alfheim, possibly with fascist tendencies, thinking they are extra special. At the same time, I don’t want to preclude a woodland heaven. So these all coexist. The world is big. There can be many heavens.

The dwarves we know from our D&D games, those cannonball beard-dudes that like to drink alcohol and fight with axes, wear helmets, like ironic vikings, I’m going to leave them as they are. They are slightly ridiculous, but elves and dwarves also provide easy orientation for new players.

I still like my take on the sex life of non-humans: all elves look androgynous, all dwarves have beards, and they don’t talk about their sex lives, so I leave it up to the players whether they want to engage with it or not.

What’s new now is that there exists a related group of super dwarves from Myrkheim, possibly with collectivist tendencies.

And thus, symmetry restored, epistemological tension relieved, but not entirely... What happens to Set, the god of assassins, poison, murderers, and snakes? Are snakes creatures of the underworld? Do evil dwarves venerate Set? Are there still underground elves that venerate Set? I have some of them and called them “netherworld elves” – are they actually Myrkheim dwarves? Or Midgard elves living underground? It remains weird enough to serve as a source of creativity, I guess. 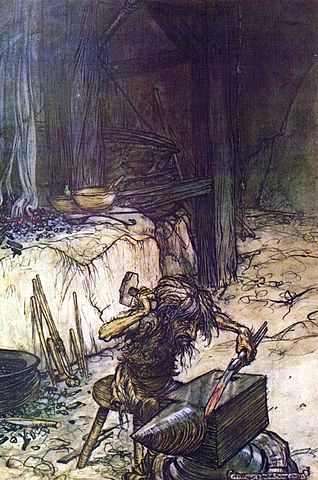