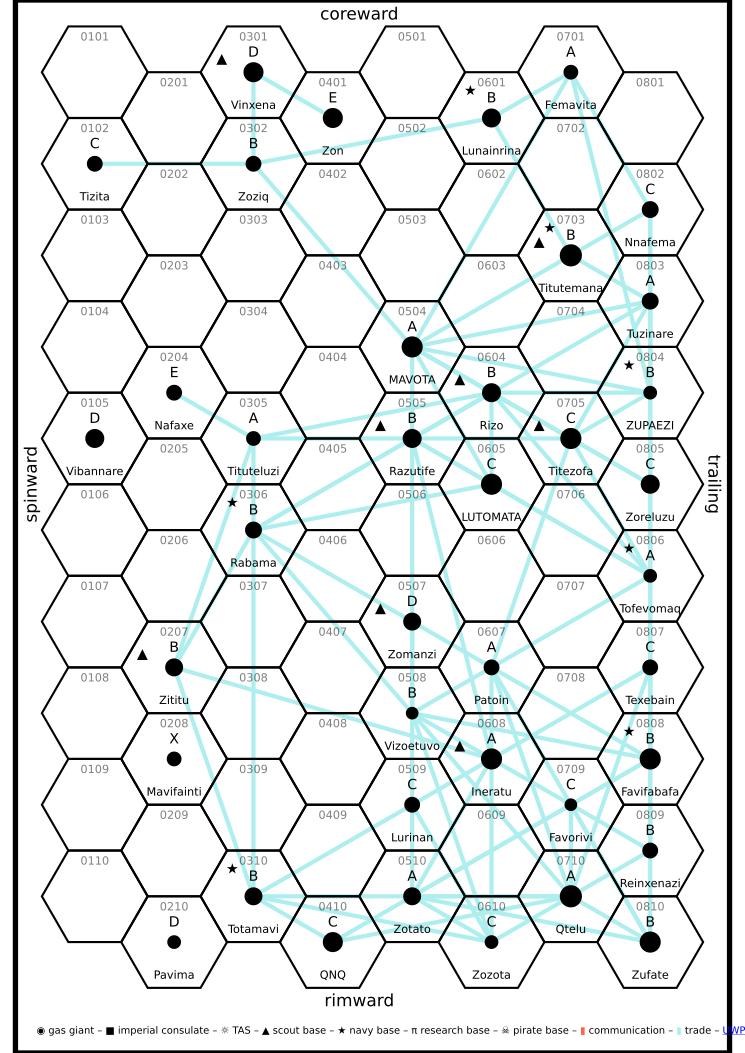 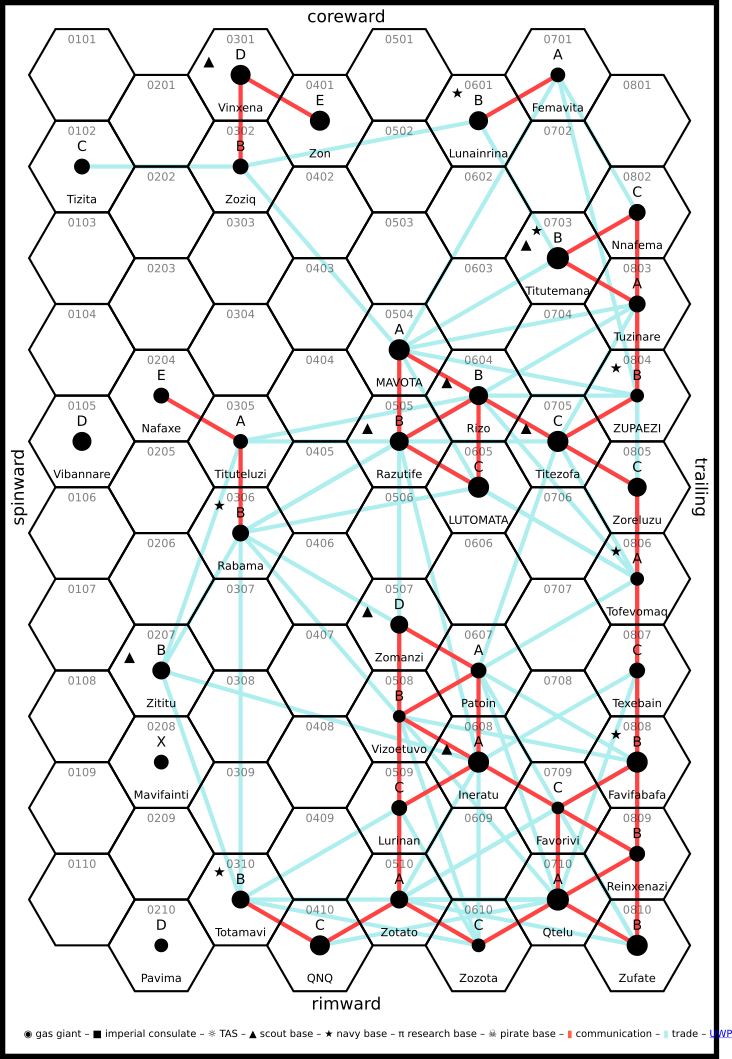 Not sure about the colour scheme. And the legend at the bottom needs fixing.

Hm... Isn’t that a bit like the minimum spanning tree optimisation? As Ian Borchardt said on G+:

One problem with your optimised paths is that you are assuming that space == time, which isn’t the case with Traveller jumps, because any jump takes two weeks, regardless of distance. [IIRC]

Which means it’s not cheaper (time wise) for a starship to call in at an intermediate port. So given a choice between A-B-A and A-A most people will still choose A-A by preference because it gets there in half the time. It has a greater efficiency.

I responded with the following:

As for trade route optimisation: one might say that the trade routes indicate the most popular trade routes and thus two jump-2 segments will be more popular than a single jump-4 segment because there will be more ships that can handle it, even if that makes the route take twice the time. Well, that was my argument when I realised that too many routes just made for an ugly map.

So basically the jump-2 route 0604-0804 says that ships can and will make this jump directly – unlike the jump 0604-0703, which is also a jump-2 but somehow the dice have decided that it’s not profitable enough to do. It’s up to the referee to explain the difference. At least, that’s Ian’s argument.

For myself, I’m still undecided. All I can say is that it looks busy and messy and I don’t like it too much.

As for distance, I guess from a player perspective, at the beginning of a typical campaign all we care about are jump-1 and jump-2 routes. Perhaps I should just use a third colour for jump-2 routes.

Support for sectors, click to zoom. Note how I used a third color for jump-2 routes. 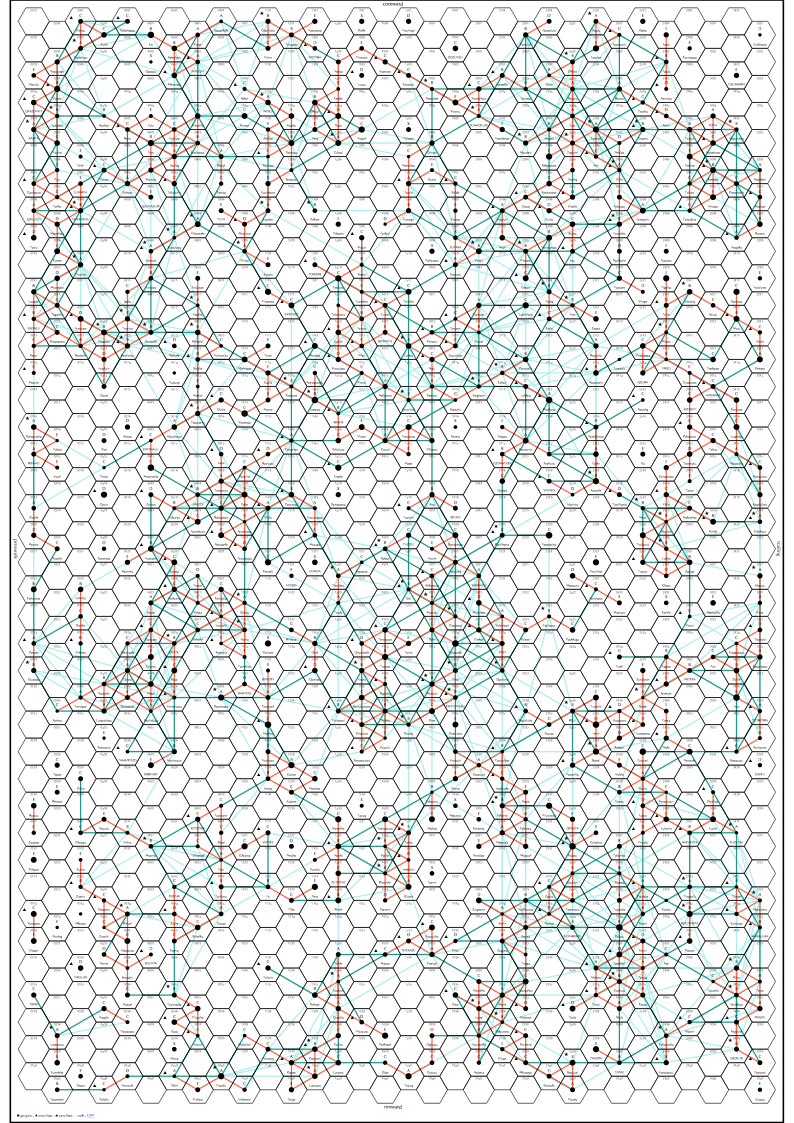 D’oh. I just noticed that my generator never generated any gas giants. Fixed!

This also means that all the random seeds will now generate different maps. Nooooo!

As for picking a subsector capital, Ian Borchardt says:

Definitely an A class spaceport (and it will have an attached Imperial naval and scout base). It probably should be a Rich world (Atmosphere 6-8, Population 6-8), and I’d assign it a Government Type of 8. The TL should be amongst the highest in the subsector (and a minimum of 12).

And regarding trade routes, he says:

This is the approach I would take.

If a connection in step 2 connects Starport A to the sector capital then upgrade it to a main route.

Next comes the feeder routes.

If in need of direction, assume the shortest path to the subsector capital.

This defines the regular services (for various definitions of regular). Everything else relies on tramp freighters.

[In your example map the small disconnected group of systems to coreward might have better trade connections to coreward than it does with the subsector it is technically a part of. Or it may be a different polity. And yes, I cheated with the rosette of class A and C starports to rimward, because of a fondness for benzene rings...]

One thing I did to simplify my route maps is that if you have three worlds, One, Two, and Three, and there is a J-1 route from One to Two, and a J-1 route from Two to Three, I also assume the J-2 route from One to Three is also regularly travelled. I also in a few places, having rolled just the J-2 route, assumed that the J-1 routes were thus also regularly travelled (this makes a world that might otherwise have had less access have more, I’m not that bothered by that, and would rather have a simpler map).