The following originated as a comment on Comments on 2008-01-13 Belflin Goes To Arcadia and was inspired by Monte Cook’s ideas regarding running combat without miniatures.

How to run a D&D 3.5 fight without a battlemap?

You can still use sketches. They will inevitably end up looking similar to this one: 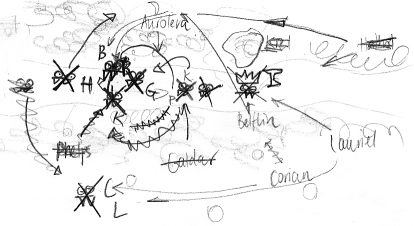 Yup. That’s pretty much how I play it too. Also:

I can smell Old School from two feet away! “Lighting bolts bounce off walls.” Those were the days...

Heh. Everything smells of Old School!

Per the SRD, Lightning Bolts don’t bounce, I know. But where’s the fun in that, eh?